Discover two castles and a city in one day!

The Peles, Bran, Brasov Tour from Bucharest will walk you through 3 different ages. In this tour we will see a king’s palace (Peles castle), a vampire’s castle (Bran Castle) and a Fortified city (Brasov City). So, let’s taste a little bit of the Transylvania history.

We leave at 8AM, in early morning from your hotel in Bucharest, to be sure that we won’t have surprises on the road because of the traffic. Our first stop is Sinaia, a mountain resort from the popular Prahova Valley where we’ll visit our first castle.

The day tour will begin with the tour of Peles Castle, castle used by the royal family in the 19th and 20th century. The mountain and the elegant gardens from around the castle adds even ore charm to this extraordinary castle. Inside, you will see the luxury: golden chandeliers, walnut tree carvings, marble fountains, Venetian mirrors, secret chambers, a royal armory, one of the finest collections of art in Eastern and Central Europe and exotic timbers and solid bronze doors.

A highlight of your cultural excursion will be the afternoon visit to the medieval Bran Castle, the second stop for us in Peles, Bran, Brasov Tour. The castle is built on a hilltop with view on each part of the valley. The castle got its fame from the novel “Dracula”, written by Bram Stoker and Dracula movie due later directed by Francisc Ford Copplola.

We will visit the castle’s many well-preserved rooms and chambers. Gothic furnishings and details help set the scene for ghastly legends of all that happened here, and will help you to discover the legend of Vlad the Impaler, the infamous Transylvanian Prince that once ruled these lands.

We will have time to take some souvenirs just outside of the castle, where you can find “Dracula” gifts, and local handmade things of wool and wood.

After or before the Bran Castle tour we will take a short break to eat something traditional in Bran.

Next up in the Peles, Bran, Brasov Tour is the Brasov tour where we will show you the highlights building and history of the old town. Starting more than 900 years ago the history of Brasov is very close to the knights, the Saxons and the invaders.

We will walk and talk about the Black Church, the narrowest street in Eastern Europe and about the life of the medieval population of the city.

You will understand why is the CROWN city and why we have two medieval parts of the city, the Romanian part and the Saxon one.

You will reach extraordinary places that will gave you some great views over the city, and very good spots for photos.

At the end of Peles, Bran, Brasov Tour we will hit the road back to Bucharest.

We will be back in Bucharest late in the evening, around 9PM.

Between September 15 and May 15, Peles Castle is open from Wednesday to Sunday only. On Mondays and Tuesdays, Rasnov Citadel will be visited instead.

Between May 15 and September 15, Peles castle is open from Tuesday to Sunday only. On Mondays, Rasnov Citadel will be visited instead.

Between November 2 and December 1, Peles Castle is closed for cleaning. During this period, you will be able to visit his smaller replica – Pelisor Castle.

During the official holidays and weekends the traffic to the mountain area might be busier than usual so the return could be later than scheduled (around 9pm – 10pm).

Highly recommend this tour. We had a great day out with Dan. He was very knowledgable, professional
and made the entire day enjoyable. He provided private tours of each castle, no need to wait in lines
and the whole process of organising and booking the tour went very smoothly.

Adrian was a fabulous guide, who contacted us in advance. He was able to be our guide in Peles Castle which was very much a family castle as opposed to Bran Castle. We visited on Halloween, when the castle was completely decorated which amazed our guide!! Again Adrian was really knowledgeable. Fantastic little restaurant in Bran Castle grounds, with awesome soup. Brasov was an interesting little town- Adrian took us to a lovely local restaurant he knew where we shared local food. Excellent driver and attentive to our needs 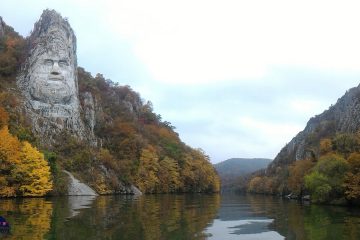